All in a Day's Work - Super Sea Turtle Edition!

Yesterday started out just like every other day of work.... Shift meeting, a stop for my bagel and coffee, off to the park to watch the sunrise. (The Pagan in me loves that I get to greet the sun every morning!)

I was talking to another Officer about the arrest we had made the day before when we hear radio traffic from the Sheriff's Office helicopter, that it appears a swimmer is struggling in the river. Assistance is needed.

Our department has a police boat and we have an officer that is the marine unit, so he gets on the radio and says he is on his way to get the boat in the water and he needs help. I jump at the chance! The boat operator is my friend and dive buddy.

I get to the marina and we hear the helicopter on the radio saying it is not a person, it's a turtle!! We drop the boat, jump on and head out. 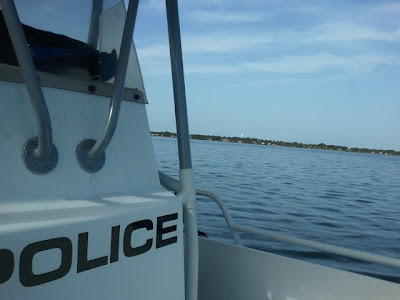 As we get closer, we hear the copter and can see the turtle. 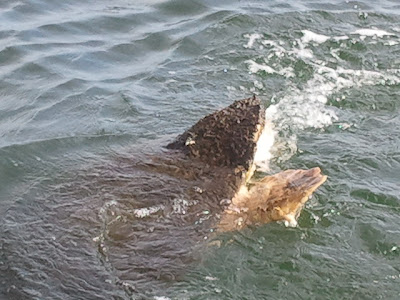 He is struggling. We see he can't dive, but he is not caught up in anything. We back the boat off a bit, because if we stress him out and he can't dive, he could drown. I shot this video while we waited for another officer to arrive.

We called the great people at Sea Turtle Preservation Society and they told us if we could get it to land they would meet us. They explained it must have a crack in it's shell and air is trapped inside. This causes a bubble, that prevents them from diving.


A Sgt. from the Sheriff's Office arrives and we attempt to get this poor turtle in the boat! We take turns driving the boat closer and two of us try and grab him. He is super slimey! LOL. He has algae and barnacles growing on his shell. We get soaked! On the 4th try we get him on the boat. 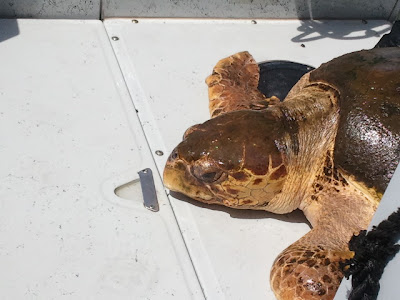 It is only then do I realize how big he is!We estimate him to be about 250 lbs. 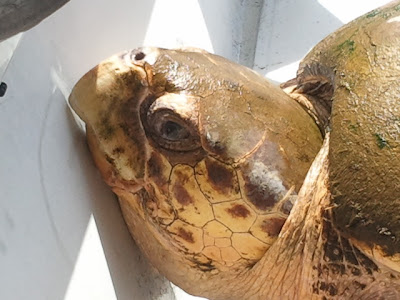 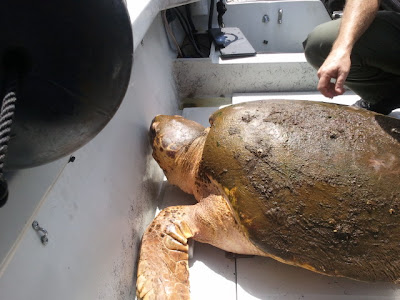 We get him to land and we try to carry him in a tarp to the truck, but that was not working. The STPS people say he is a deep sea turtle and for him to be in the river is unusual. The Indian River is a mix of salt and fresh water that runs into the Atlantic Ocean. 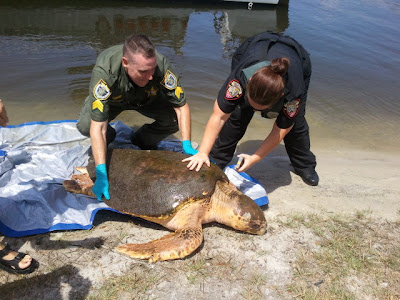 So the three of us just all grabbed a spot of the shell and put him in the back of the truck for his ride to Orlando. Where Sea World said they would take him in and fix his shell.

Here is his ride! LOL, If you are local, check them out, they have lots of volunteer opportunities! The lady from The STPS says that since I caught him, I get to name him...so I decided since he was big, round and calm, I would name him Buddha. 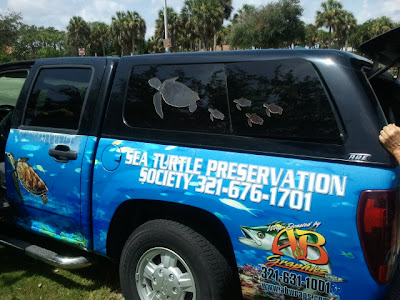 I peek in on Buddha one more time before he leaves so I can put a wet towel on him for the ride. I tell him it was awesome to meet him and to get better soon, The STPS takes my phone number so they can call me when he is ready to be released back into the ocean and they said I can come along!

Posted by Badge and Pentacle at 10:01 AM