All in a days work - Hog Wild!

I get to see and do, all sorts of strange and interesting things while at work. So, I thought I would do a re-occurring post about some of those things.

Today at work was like every other day, it's all the same, until it's not the same. I work for a city of about 100,000 people, we have urban areas but we also have a lot of undeveloped land. This can cause some fun moments for us at work, because of animals.

We received a call that a feral hog was loose in a backyard. This is disturbing. We have a pig problem! There are an estimated 500,000 wild pigs loose in the Florida woods, they can grow up to 200 lbs, they eat anything and everything and the males can become very aggressive.

Several officers and myself went to the residence, quietly approached the backyard and spend an hour trying to wrangle this fearsome beast! 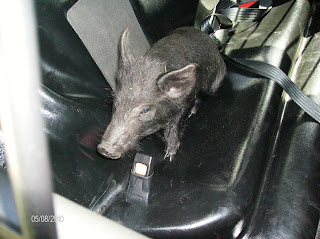 I don't know if this little piggy was super fast or we were laughing to hard to catch him but we finally did. Several people in the neighborhood came out to watch us look very silly. I saw lots of phones so I am sure there is a Youtube video somewhere! :-)

I put Mr. Piggy in my patrol car and brought him deeper into the woods away from the houses. I thanked him for the fun and that I was happy to have met him.  Hope he stays safe and away from people.
Posted by Badge and Pentacle at 10:45 AM