My Grandfather was an amazing man and an even better gardener. As a child, I would go to his home and help feed his horses and work in his veggie patch. We lived in New England but I felt like I was in a tropics. Tomato plants that were as tall as the sunflowers, created a perfect jungle to play in.

He made his own compost and fertilizer, using scraps from his restaurant and other "scraps"( i.e. manure) from his horses. He would put it all in a big bucket, add water, seal it up, and place it in the sun and make what he called "Spring Tea". Sounds disgusting, doesn't it? It was magic, cucumbers over a foot long, eggplant that weighed in at four pounds, it truly was amazing.

Fast forward 20 or so years, and I found myself living in Florida about 3 hours from where my Granddad had retired too. I would drive over every month or so to see him and enjoy his fantastic cooking. He was getting older but he still gardened and now in Florida he had fruit trees too. I would ask him over and over all the things he did to make his plants grow. I suffered from an extremely black thumb. I could not even keep houseplants alive.

Last February, my Granddad told me he had cancer and it was terminal. The doctors could not tell him how long he had, so he left the hospital and went home. I began spending every day off I had with him. My youngest son, was three at the time and I wanted him to have memories of his great granddad, like I had from my childhood. They would get on the tractor and just drive around the yard, pick oranges off the trees in the back and sometimes just walk hand in hand.

Soon, he began showing signs of his illness and our visits focused more on indoor activities. I knew he missed being outside and growing things so I vowed I would grow a damn tomato plant if I had to sleep outside and watch it every minute!

I had managed to keep a houseplant, a golden pathos, alive for almost two years with my Granddad's advice so now I was going to venture out into my back yard and grow him some tomatoes.

I encounter my first hurdle almost right away. As I dug up some grass in my yard, I found sand. Interesting, So, I did what all nerds do, I went to the internet and began researching container gardening. This seemed to be the perfect plan as I needed to be with my Granddad on my days off. I found a nice one that is sold by The Garden Patch. It was self watering, which was great because I work twelve hour days, have three kids and have a 6 hour round trip car ride, three times a week to Granddad's place. I waited for it to come and when it did, I had it put together in minutes. I bought two tomato plants at Lowe's. Don't ask me what kind, just what was there on the shelf. I planted them and waited.

By March, I had several flowers but no fruit. Second hurdle. Back to the internet, ok, my problem was no bees. Being highly allergic to bees, this presented a problem. I found that certain flowers put near my tomatoes would bring in more bees, like Lavender and Mexican Heather. Soon, we had bees and I began carrying my epi-pen everywhere. But most importantly we had TOMATOES! 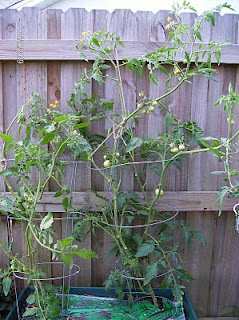 The third hurdle was the pests... the caterpillars were easy, my German Shephard/Shar Pei mix was another story. Bailey was fascinated with ever inch of those plants. He drank out of the container, he would chew the leaves, ate more then one green tomato, to be sure. He would get his paws in the dirt and try to dig out the plants. I used no chemicals to fight the bugs and caterpillars, I wanted the fruit to be as organic as possible because of my Granddad's bad health but I swear I wanted to use mustard gas on my pooch. Don't let that sad face fool you, he was a menace! 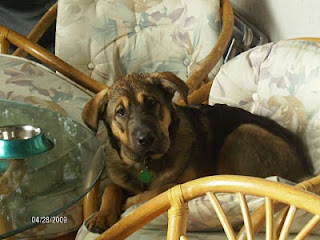 By the end of March, I brought my Granddad six ripe tomatoes and he laughed when I began to explain all my trials and tribulations, just to get those six. He told me several ways to kill bugs with out using chemicals and I tried to write down all he said.

We celebrated his 79th birthday on March 30 and a few days later,  on April 2nd, he passed away. The man who taught me how to make home-made soups, to fish and now how to grow things had left me, but he left me with a new found love of gardening, that I hope I can pass on to my sons. I love you, LRH, every time I am in my garden I feel you with me. Thank you.

Posted by Badge and Pentacle at 11:24 AM