Proselytizing and Propriety or Wow, they are getting Sneaky! ;-)

We, as Pagan’s sometimes get a little annoyed but mostly amused when someone comes knocking on our door asking if we have found Jesus.

I have had Jehovah's Witnesses, fundamentalist Baptists, and even The Church of Jesus Christ of Latter-day Saints A.K.A. Mormon’s stop by….they must feel the desperation of my apparent NEED of being saved because they keep coming back! Anyway, it is a minor bother and I am always polite, decline and ask that they do not return but that always seems to fall on deaf ears. I was thinking of putting up a nice sign asking them to refrain from knocking on my door as I have told them in the past, I am not interested. Maybe if I put up a section of Mark 4:12, it might help?
“So that although they look, they may look but not see,and although they hear, they may hear but not understand, so they may not repent and be forgiven.” I forgive you for bothering me, AGAIN, please do not come back!
I do realize that proselytizing is important to many religions and I do my best to stay open minded. But something happened that has me a bit put off.

On Sunday night, Ender and I were in the front yard and he saw a female classmate of his,one he likes to play with at school. Her family apparently just moved in a few doors down from us. Very cool. Ender was very excited and we took a walk over and I introduced myself to the girl’s parents and we had a nice chat. The kids played a bit and we walked back home.

During the night, Ender started getting sick and the next morning, I decided to keep him home with me. We had a quiet day and did some extra snuggling, because he puts up less fuss when he is sick. Hey, he is my last kid and he is almost 9, I will steal snuggles anyway I can. Don’t judge me! :-)

After school, there was a knock at the door. It was the girl, asking for Ender to come out and play. I told her the reason she didn't see him at school today was he was feeling ill but as soon as he was better, they could play. She asked me to tell him she hopes he feels better soon and she said, “My Mom said to give this to him at school today” and she hands me a paper. I thank her, thinking its something she made for him or an invitation to a Halloween party. We say goodbye and I close the door. I am about to give Ender the card, when I look at it. THUD! My jaw hit the floor. It said “I am a Child of God.” “Are you?” and it was an invitation to attend their church, next week. Wow! Hmmmm. I had to sit and think about this for a minute. First, I was angry, then confused but ultimately amused. This is a new tactic…interesting.
I gave it to Ender, he read it, looked at me and said “Ug, do I have to go?” I said “of course not” and that was that. I considered going over to the house and talking with the Mom about it but the kid seems nice and Ender is looking forward to having someone in the neighborhood to play with after school. I am a bit miffed still that the Mom would try to send it covertly to school and not just ask me if he might be interested. Here is a picture, I intentionally left off the church's name and address in the picture. 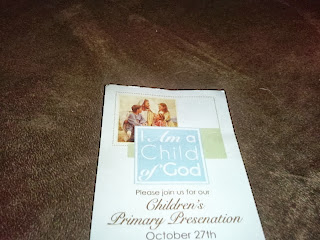 So, I am sitting here now trying to figure out what I can send with Ender, to school for his new friend to bring home? An invitation to Samhain, maybe some kiddie Tarot cards, or should I just go big and give her a pentacle necklace? I would never do that, I have a sense of propriety that I fear my new neighbors lack, but still it would be awesome to see the look on their faces!!!!
Posted by Badge and Pentacle at 1:43 PM