This is a not safe for work or kids blog post!

Today is "Black Friday, that crazy, turkey fueled, shopping extravaganza! I live across the street from a mall and several big box stores. We saw people lining up for a few days before the holiday, for the good deals.

I went in service, this morning, at around 5:45 A.M. As soon as I turn on my radio, I heard a call come out at the mall, involving two males running through the line, hitting the waiting shoppers.

I was on scene in seconds, and I saw people pointing to a large white truck pulling away. I did a traffic stop on the truck and this is what I saw after the driver and passenger exited the truck. 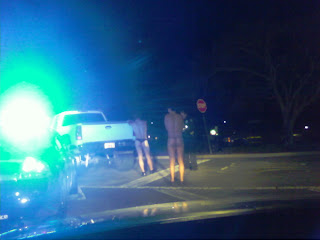 Two young guys thought it would be funny to wear only thong underwear and run through the crowd. The joke was on them though, this morning was very cold for Florida. It was 39 degrees, which when you are used to temps of 95+, IT IS COLD! They had to wait while we spoke to everyone who got hit, if the wanted to press charges for unwanted touching (battery). No one did but we still had to ask. They were freezing.
Posted by Badge and Pentacle at 7:30 AM